You are here > About Us 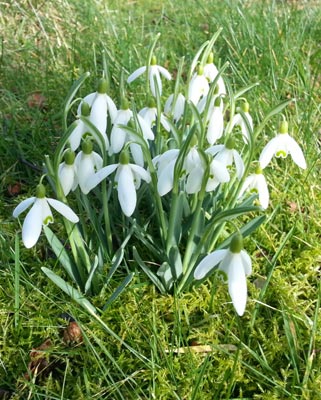 The History of Skye Horticultural Society

The following information has been taken from "The History of Skye Horticultural Society" a booklet produced by the Society in 1990.

"The Society owes a considerable debt to Lindsay Hamilton Esq (formerly Lands Officer for the Department of Agriculture in Skye) for the majority of the research which has provided this short history.

The build-up and background to the formation of Skye Horticultural Society can best be considered in eras.

At this time horticultural interests in a limited way were provided for under the auspices of Skye Agricultural Society. The provision was for a flower show, but records show that domestic items were included. The Flower Show was held on the day of the Agricultural Show and was located in the Territorial Drill Hall, Portree. It has been related that the show was notable for the beauty of the blooms exhibited. The entries came from the gardens of the larger estate properties and houses in the district and were produced by professional gardeners. The Lodge, Portree (now the Cuillin Hills Hotel), Portree House, Raasay House, Scalpay and Skeabost were notable among exhibitors.

The Agricultural Show and the associated section, the Flower Show were discontinued at the outset of war.

At that time an event took place of significance in the ultimate foundation of the Skye Horticultural Society as it now is. This was the appointment, by the Government of Advisers to stimulate the food production from gardens, as a war-time necessity. Skye was fortunate in the appointment of a Mr John Dawson of Inverness, who had been trained by Howdens and who included Skye in his territory.

John Dawson was not only experienced, but he had a quietly effective way of encouraging people. Those who had been interested in gardening elsewhere and had given it up in Skye, were encouraged to re-start with vegetable production and local people were stimulated to join in. Impression can best be gained of what developed in the situation and by what stemmed from John Dawson's impact by quoting from an article appearing in the Oban Times during 1970 under the titles of 'Annals of War-time Skye'.
In this week in 1943, a Horticultural Show was held in Portree, the first of its kind since pre-war days. It was still, of course, war-time, and members of the Women's Land Army appeared on the platform of the Drill Hall to receive their badges. The event raised £100 for Skye hospitals and the Red Cross.

Two years later, the show had become even more successful in raising £272 for local charities and £184 for the Portree Welcome Home Fund.

Preceding the first post-war show, the necessity of forming a committee became evident and that really is the germ from which grew the Skye Horticultural Society as it now is.

The initial moves taken by John Dawson were to discuss with the then proprietor of the WestEnd Garage (A B Stewart) and his wife Agnes, the possibilities of a show. Bertie Stormont had considerable experience as a gardener and exhibitor in Angus and Mrs Stewart was experienced in raising and arranging flowers. Bert Stormont was elected first chairman of the committee and continued in office for several years.

Mrs Joanie Forsyth was a member of the original committee and from recollection acted as secretary for the first show and sale. The remainder of the committee was made up of a few interested people around who had attended the first meeting and the Agricultural College advisers in succession were most helpful members.

The first plan was to significantly increase food production in the form of vegetables for the table and quantity was the first consideration. John Dawson promoted the idea of a show purely as the basis of an added incentive to as many people producing as much vegetable food as possible, and tied in with the amassing of produce was the idea that the sale of a proportion of it could assist charities, and particularly at that time, the Red Cross.

To that end, when a show was held, milk produce not for exhibition, but purely for sale, was sent in. Accordingly, as long as a sale for charities remained a main aim, a bag of potatoes was always received from Calum MacNab, a crofter in Drumuie, as his contribution.

This then was the war era.

In the post-war era, there were two observable main features:

Taking these features in turn, the first of the speciality growers was in fact a crofter from Kilmuir, a Donald MacKenzie, whose croft is at Camus More, adjoining Bornesketaig. His speciality production was of onions and they were remarkable in size and quality (it was quite an experience to see Mr MacKenzie's growing location-it was on a little rock knoll beside his house and on the knoll, on little pockets and shelves holding soil, with a southern exposure and excellently sheltered). There are, of course, specialised ways of producing these large-sized onions and the technique was known to Mr MacKenzie.

Jimmy Douglas, also a crofter from Kilmuir and bus driver on the Portree - Kilmuir run for years, developed the growing of exhibition leeks to a very high order. Then it was found that the carrots grew in very fine quality with excellent skin texture in the Duntulm area and the shows began to benefit from that area. Notable in the early stages were those from the gardens of the coastguard houses at Duntulm and from Murdo Stewart, who gifted one of the show trophies.

While crofting participation has been mentioned, the commercial side should not be ommitted as this may also be of some interst.

At Kyleakin, Mr Brown, apaint manufacturer from Glasgow, who had long holiday connections with Kyleakin, made his home there and established a real horticultural enterprise. He brought up a professional gardener from Perth and erected glass houses for the production of tomatoes, with chrysanthemums as a winter crop.

The tomatoes marketed with reasonable success, but the chrysanthemums failed to sell, as at that time there was a very limited tourist season and most hotels were closed over the winter months or were on a very reduced basis. Mr Brown's enterprise shut down after one season and the glass houses were turned over to deep-litter poultry.

In Glenconon crofting township, Uig, one of the crofters started a vegetable growing enterprise to market round the area and in Portree, but with cabbages and greens as a first crop, his own market was soon glutted. He could only have success by then growing small quantities and maintaining regular succession. This brave enterprise was also abandoned.

More successful was Commander Bonney (RN ret'd) in Raasay who, to secure occupancy of the gardener's house, took over the working of the walled garden of the Raasay House Hotel. He established a regular supply of flowers round the year to a florist's shop in Stornoway, which was possible then, as there was a regular boat service between Kyle and Stornoway, which called at Raasay.

From Orbost, Colonel Swire established a regular supply of flowers to Malcolm Campbell, florists in Glasgow, with bulbous flowers and others in succession. This enterprise helped to defray some of the costs of keeping up the garden, but freight costs were prohibitive and prevented any expansion.

We now look at the subsequent step which introduced the present era. In the first instance, an annual show only had to be provided for and all that was necessary was for a committee to meet at the appropriate time and arrange and man the show. The important person was then the secretary, as now. The commitee just appeared to go on year after year.

But a change was becoming evident on the island as an influx of people, many of them with gardening interests and experience. Thus the Horticultural Society took full shape, committed to fostering, to the fullest extent, interest on horticulture and widening the whole scope of interest. In this they were assisted to a great degree by the Northern College of Agriculture in the shape of Mr Jim Sutherland, who was the horticultural adviser to the whole of the north and west for many years. Horticulture owes him an enormous debt.

He demostrated, advised, gave illustrated talks, judged at the shows, helped set up new commercial ventures which were just starting, and brought his wife with him to the main shows, to lend her special know-how with flower arranging to the judging of the entries in this class which have increased steadily from year to year.

At that time, Archie Young was the perspatetic teacher of gardening to the Skye schools. He and Dougie Campbell, the further education officer really gave the show a further lift and with the efforts of Mr Calder, Eynort, they attracted exhibits from a much wider field than previously. Archie Young also started a monthly newsletter which drew favourable comments from those unable to attend meetings, but failed through lack of sufficient local contributors. He always felt that the link between the schools and the Horticultural Society was under-exploited, a feeling which continues to this day!

Enthusiasm for plants, gardening and growing a wide variety of food, shrubs, flowers and pot plants continues unabated, hardly dampened by the climate in which wind and rain often prevail. Indeed it is the challenge whom most take up with sturdy determination to overcome, and the results are truly remarkable. The weather conditiona also serve as a great unifying factor and serves to eliminate the type of ruthless competition seen at shows elsewhere.

It seems invidious to mention just a few names of people who have made an outstanding contribution to the Society in recent years, but no history of the Society would be complete without mention of the late Charlie MacDonald (Forester), whose inspired planting at the edge of the older forests has matured so happily today; the late General Harry MacDonald; Bob Munro; Mrs Elizabeth Wakefield; Mrs Margaret MacLean; Mr and Mrs Colin MacKenzie (Kyle House) and Mr and Mrs Raonull Maclnnes who made this Society into what it is today. On the foundation which these dedicated gardeners and organisers have laid, many others have continued to build and contribute, for the benefit of everyone in Skye who wishes to take advantage of it.

In compiling this brief history, especially grateful acknowledgements are due to Lindsay Hamilton Esq, Inverness, once the Lands Officer to the Department of Agriculture in Portree and to the research done by the late Denis C Alston."